Once upon a time in a calculus class, I was trying to evaluate the following integral:

The obvious way was to do a partial fractions decomposition, but I was feeling lazy and decided to use Wolfram|Alpha to compute it and check the step-by-step solution to make sure I had the correct idea. Instead of using partial fractions, Wolfram|Alpha gave an interesting alternative solution. First, notice that

which becomes the correct answer once you substitute

back in and simplify. Now, what did Wolfram|Alpha do? It multiplied the numerator and denominator of the rational function by a convenient power term

and added another convenient constant

such that if you set

equal to the denominator, the substitution just so happens to give you the integrand

. My question at the time was how did Wolfram|Alpha know which power and constant to use? I mean, the fifteenth power sure wasn’t an obvious one, so there must have been some systematic way of choosing it. This problem has been in the back of my mind for about a year now, and I think it’s finally time to take a closer look at it. Let

. In order to integrate

with the same trick as above, we want to do a substitution like

. Taking the differential of

But for the trick to work, we must restrict the differential to also equal

. Thus by comparing the coefficients of the two expressions, we arrive at a pair of equations:

Solving this system of equations gives a solution for

Now let’s integrate. I’ll show the substitution step-by-step, which leaves some rather unorthodox integrands, but I promise they will cancel out. Using the substitutions defined above, we have 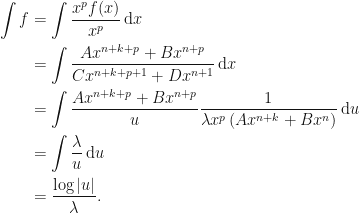 again and simplifying gives the final answer as

Let’s look at a slightly nicer example than the one at the beginning of this post. Suppose

. With this, we have

. We can now calculate that

. Thus we have that

which, if you take the derivative of, is indeed an integral function of

. Now, was this easier than doing a partial fraction decomposition? I don’t know. I suppose it was faster doing it like this since it’s just plugging numbers into a formula, instead of decomposing the function and then integrating each piece separately (which there are four in this instance). But that’s as far as this goes. This isn’t a useful tool for actually computing integrals as it relies on a specific pattern, which partial fractions don’t. Nonetheless, it is an interesting little factoid, so here are some further things to consider: can you generalize this to cases where the powers of the terms in the denominator differ by something else than 1? What about to general rational functions?